This past week I made a decision and acted on it. I've been mulling it over for a month or more, prayed about it, and found myself increasingly antsy to do something about it. I've decided to go PINK! That is, I'm quitting my "day" job and devoting myself to my Mary Kay business. Do you think I'm crazy?

A few years ago (6) I decided to become a Mary Kay consultant. At the time it was a good financial decision and not much more than that. Oh, I heard the stories and I knew all about the pink Cadillacs, but that wasn't in my vision. I just really liked the product and my skin was better when I used it.

When I joined, I was a stay-at-home mom who homeschooled her kiddos and was active in my church. I could happily stay in my p.j.'s all day with my coffee cup in hand, getting dressed when forced to. I took care of my appearance for other people only. I weighed almost 50 lbs more than I do now.

Here's what happened: I began to think "Well, since I'm a beauty consultant, maybe I should get dressed in the mornings so I'm ready to represent." What an idea! Slowly, but surely that attitude began to permeate my being and I began to respect myself a little more. (My bad feelings about myself are another story altogether.) Over the next year, I began to increasingly take care of myself. I began to respect myself more. I began to exercise. It wasn't one thing or the other rather several things combined to help me and today I am a much healthier version of me. It wasn't makeup, but it was my perception of myself, day in and day out that changed. Makeup and skin care was just part of it. 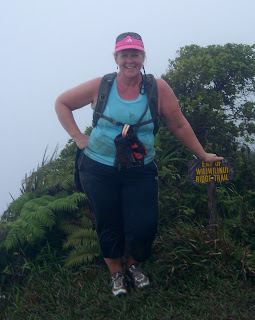 Fast forward... Last year with my husband's retirement, I began to search for things to fill my days and provide some extra income. I wanted to make a contribution, but our country was in the height of a recession. I took 2 part time jobs making a small amount of money and worked them with all my heart. Many weeks I only got 15 hours of work between them both, however, I totally enjoyed being out and about. Sadly, one of the stores closed, leaving me with one of my jobs and no consistent hours. I felt like I needed to look around for something else. Meanwhile, the Lord seem to speak to my heart to "walk the path you're on". After much prayer, I realized I was already a business owner and perhaps I should work that business instead of look for something else.

By the way, as much as I loved my retail work, it was taking a great physical toll on my body. My legs were having some very serious issues that began to affect my back. I was dealing with considerable pain on a regular basis while having to work quite a bit to make a fairly small amount of money. Still, I enjoyed the work.

My decision to put real effort into my Mary Kay business came in late September. By October, I was already seeing that with some effort came payoffs. And the payoff was preTTy good. I continued to work it and my retail job. As I found success in my business, I began to let my mind consider greater possibilities. Up to this point, I thought real success was only for a few and not realistically obtainable. I now know that is not true. The fact is not many people are willing to really try.

Well, here I am 6 months later: I'm a Team Leader and in position to become a director, as well as earn the use of a Mary Kay car. (You work your way up to the famous Pink Cadillac.) I am motivated to keep on working because 1) I believe in the company priorities: God first, family second, career third. 2) I don't want to go through another summer of missing out on important family events because I can't control my schedule. 3) A little Mary Kay work replaces my retail job $ pretty quickly. 4) I have the opportunity to make much more $ (no territories, no quotas, no limits). 5) I totally love what I am doing! 6) The company has great integrity and is one of the few that has continued to make $ during the recession and provide hope for women who were struggling financially. 6) I like who I am. I am experiencing great personal growth and it's fun! 7) Weekly meetings filled with recognition are awesome! I've stood by for years watching the military members get decorated and acknowledged for their hard work. It's good to get some of that for myself. 8) I believe I can help other women develop themselves through their own business. 9) I know it's never just about makeup. 10) I'm working to follow Proverbs 31 and I believe it honors God. 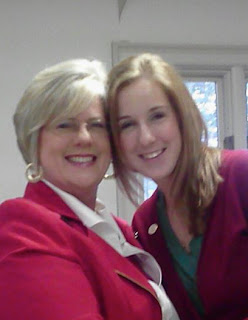 The benefits of this business are rewards for consistent hard work. It is not a get rich quick scheme and doesn't promise to be. It's also not a pyramid. Each consultant buys directly from the company and moves up the ladder by her personal sales, her team size and her team sales. The company is paying the commissions for team sales. Each team member earns her own $ for herself. I'm so confident of this, I've introduced the business to my daughter!

So, now you know why I'm going PINK! I would love to have your business or even better have YOU as a team member! The more I learn the more I like it. Your support means the world to me and when I get that pink Caddy, we're gonna have a PINK PARTY! (BTW, those pink caddy driving women are making serious money and don't you doubt it. Give 'em a thumbs up cause they've worked hard.)
Posted by CoachStephanie at 6:00 AM