I live smack-dab (that's the way we say it here) on the Georgia/Alabama state line. Those of us on this side of the line nearly always give thanks for that great blessing. I don't know how the folks on the other side feel about it, except one of my family members who lives smack DAB on the other side, in view of my house, and gets tired of us giving so much thanks for living in Georgia. I watch the sun set in Alabama (from the Georgia side) every night and it's quite beautiful, so maybe Alabama has some blessings too. I don't know for sure, but maybe. ; )

We call the home we live in "The Cabin". It's not a cabin; it's a house. We call it the cabin because it used to be a cabin before we tore that down and built the house and truth be told, it wasn't really a cabin then, it was more like a shack, but not trashy, just very humble. We loved it. LOVED it. Spent nearly every vacation there. Had all our big family gatherings there. Taught our kids to love it. Loved it so much that when we built the new house, we kept the term "cabin" because it's so special to us and brings up all the wonderful memories that go with it.


Up on the main road, before you hit all the back roads, coming from town there's a little establishment that sells necessities you might not want to drive 25 minutes into town to pick up. Ice, beer, soft drinks, bacon, butter, bread, gas - it's called "The Store". Once upon a time "The Store" used to be across the street, but then they moved. Next door to "The Store" a little business opened up that sold hammers and nails and pine straw and plumbing parts. It was called "The Hardware Store".  It sold recently and they sell trailer hitches now. I don't what they're calling it these days. We have a little shopping center with a homecooking restaurant, a bar and a few other things that go in and out of business and that's about it anywhere near us.

When you exit the interstate from the north side to head to the backwaters, rivah, lake there's a 4-way stop and there at the 4-way stop is a cinder block building painted top to bottom with, frankly speaking, the most awful mural I've every seen. It's the woods and deer and such all over it. There's a dirt parking lot of sorts and that's it, except for the little yard sheds out back. This establishment is called "Hunter's Pub" and for years (and YEARS) when we arrived in town for our vacation and drove past this awful looking place, my dear and darling would say "We oughta give that place a try sometime." Every time I'd cast my eyes sideways, scrunch up my face and say something like (I can't remember exactly how it went...) "Are you out of your ever-loving mind? I am NOT going in there. We have no business in a place like that! I can't believe you'd even suggest taking me in THERE." Something like that, I'm not really sure. Every year, for YEARS. 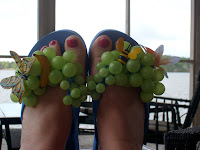 Finally the day came when the darling little cabin became ours and we tore it down and built the new cabin which is a house called a cabin. Some time during the building process our builder suggested we should all go get a steak some time at that place by the interstate. My husband's eyes got a little bright and I bit my lip or something. "Really?"  asks dear and darling. "Huh." I say. "Oh yeah. Just not on a Friday or Saturday, cause you'll never get in." "Interesting" we both say, but in different tones I'm pretty sure.

Needless to say,  we gave it a try and have been back numerous times since, most recently last night. At Hunter's Pub you can get the best ribeye you ever tasted, grilled mahi mahi topped w/ a huge crab cake that actually has crab in it and that's about all that's in it, fried lobster tail that will make you want to slap your mama, garlic mashed potatoes, sauteed spinach and killer sweet potato fries. And though the place might be filled with hunters, you'd never know it for sure, cause they're all sporting polo shirts and khakis. While there, you'll notice that the inside decor isn't much better than the outside and you might be surprised to find that the potty walls are camouflaged. There's some trophy bass on the walls, pine sprigs, and even a little lace as I recall. While dining you might realize that it's just an old gas station re-done for dinner and while you're there Jeff Foxworthy and his own personal estrogen ocean might walk in.

And I guess that sums it up. . . I live on the backwaters and though we might not impress you, we like who we are and HOW we are. And we know good food. Don't mistake our humble demeanor for lack of smarts, taste or money 'cause, honey, we got a little bit of everything up where I live.
Posted by CoachStephanie at 8:39 AM